At the beginning of WWII, 2 civil aircrafts were claimed by the military forces, to use as liaison airplane, the OO-APR and the OO-ACB. It were 2 of the original 6 SV-4 planes. Two pilots who fought during the first days of the war, Ad. Fl. Désiré Verbraeck and Sgt. Fl. George Reuter, are at that moment in France, waiting for the German occupier and a certain time as POW. From excisting photomaterial and documents it is almost certain the plane was the OO-ACB (also the SV-4 OO-APR and the SV-4B OO-AOU had military colors during wartime).

Just as other pilots in those wardays, Verbraeck and Reuter want to try to reach England or Africa, to join the the allied forces, to continue the fight against Germany. But flying to England or Africa, from the South of France, is impossible with the SV-4. The best option seems to fly to Portugal. Still almost 500 km, with a crossing of the Pyrenees. It takes till 20/6/44 before their commander gives his permission for the attempt to escape. They take off at Moissac, wit a stop in Dax for refuelling. 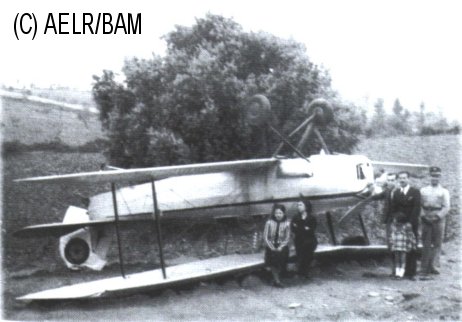 Totally disorientated and with no fuel left they land in a valley, on a just plowed field. At the landing the plane goes overhead, without a lot of dammage. Also the pilots are not injured. But they were in Portugal.

What happened afterwars with the plane is not known. Probably there was more dammage then presumed and it was used for spare parts. They have to stay in Portugal till the end of august 1940. Then Verbraeck and Reuter can go oversea and reach Belgian Congo. In Rhodesia (Zimbabwe) they can join the RAF, other a false name, because they are affraid there families could have trouble otherwise. They take the names John Patrick Robinson and James Carter. They receive the grade of Pilot Officer and join the 45 Sqd, flying with the Bristol Blenheim, a two-engined bomber. Gerorge Reuter dies on 19/5/41 during a air fight above Benghazi in his Blenheim IV T2179 "J". Verbraeck, who joined in the mean time the 11 Sqd, dies on 22/11/41 in a German JU-88 bombardment on the airfield LG-104. 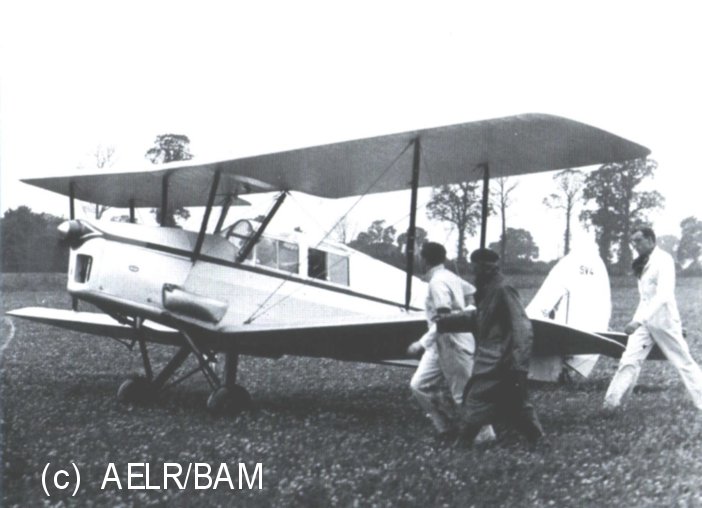 Rare photo of the OO-ACB before 1939. The plane had originally a closed canopy. But Stampe rebuild it with an open canopy (Collection AELR/Brussels Air Museum)

Database, history and gallery of the 65 airplanes that were used by the Belgian Air Force, and the still flying planes.
Acro Team "Les Manchots" , the SV planes they used, and the aces. Article of Dominique Hanson.
Crash report of the accident with SV-4b V43 in Twente (Netherland) in 1986 - Crash report of the accident with SV-4B V53 at the Old Rhinebeck Aerodrome New York (USA) in 2001 - SV-4B crashes in Belgium database of all Belgian SV-4B crashes
SV-4B with Blackburn Cirrus engine article of L. Wittemans.
Other types of SV airplanes and the LINK trainer , the other types of SV airplanes build bij Stampe Vertongen and an article about the LINK trainer, the first generation of flight simulators.
SV-4B OO-ATD and Divoy and Donnet, flight to freedom of Leon Divoy and Michel Donnet and SV-4B OO-ATD - SV-4B OO-ACB van Verbraeck en Reuter and their flight from France to Portugal in 1940
SV-4B V2 trip to Kamina (Congo) , in 1950 military pilot Manu Geerts had to deliver SV-4B V2 in Congo, Kamina. A trip of 10.578km, and 66 hrs flying time, article of R. Decobeck.
SV-4B in WWII in Africa , at the beginning of WWII 24 planes of the earlier SV-4B version airplanes, were transferred to Congo, at that time a Belgian Colony. This version had no closed canopy. An article of L. Wittemans.
Belgian Air Cadets , they used for several years the last military SV-4B airplanes.
SV links and other related links