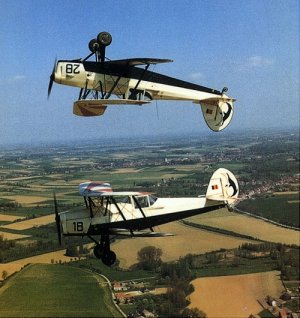 On the occasion of the 1964 Air Meeting at Melsbroek the Basic Flying School of the Belgian Air Force was solicited for the first time to participate in the international air show with the SV-4bis, a training aircraft of Belgian origin. Early in 1965 a series of training exercises were started aimed at composing an aerobatic team.

In consideration of the specific nature of the SV-4B it was impossible to compose a program that could withstand comparison with other teams flying jet aircraft. The SV-4B being much slower and lighter, developed less power and was very susceptible to whims of the wind. On the other hand it turned out to be more suitable for acrobatic maneuvers and for inversed-flight configurations.

In view of the participation at air meets and without interrupting their job as flying instructor, Captain-Commandant Feyten and Lieutenant Lambermont practiced a patrol configuration, whereas Warrant-Officer Pilot Janssens concentrated on a solo performance.

The Manchots Patrol distinguished themselves in bringing to live a series of bold acrobatic maneuvers bearing heavily on the possibility of inversed flight. The brand new patrol officially made their first appearance during the international air meeting at Brustem in 1965. Offers for participation poured in at a high rate and their presence was frequently witnessed both in Belgium and abroad. In 1966, a year in which their calendar was filled to the brim, Lieutenant-Pilot Christiaens took over from Lieutenant-Pilot Lambermont.
With the advent of the year 1967 the patrol still has no name.

The crest of the EVS and the particular nature of the maneuvers executed with great virtuosity by the pilots in the course of the air shows, contributed heavily in choosing an unusual and humoristic name: the "Manchots", French for penguins. A Manchot not only is a penguin, but also denotes a one-armed person, therefore a slightly awkward person. As offers for participation both in Belgium and abroad keep piling up a strong selection became both crucial and essential.

The patrol was sent abroad to the remotest places, resulting in extended and tedious flights: Troyes (France), Middleton Sea Side (UK), Eindhoven (Netherlands), Hunsborn (Germany) and Ravenna (Italy), to just mention a few.

SV-4Bs that were part of the "Manchots" acrobatic team.

Pictures of all the SV-4B "Les Manchots" airplane, flyer and figures

SV-4B V65 was the first Belgian SV-4B with special painting. Years before "Les Manchots", in 1957, the SV-4B V65 got a special painting for the participation by Adj. Alex Janssens at the Lockheed Aerobatic Trophy (unofficial air acrobatic world championship). After this participation the V65 was used for another 2 years for solo-demo's.

Particularities of the demo

Vertical acrobatic maneuvers such as loopings and stall turns in boxed inverse-flight formation. Some twenty acrobatic figures and fifteen formation changes in twelve minutes all within the limits of an average-sized airfield. Loss of altitude had to be limited to a mere 300 meters.