Belgium is a small country at the North Sea coast, north of France, West of Germany and south of Holland. It currently has 10 million inhabitants.
Belgium became independent in 1830. Of course the country never had important military or political power; but its strategic importance is great. Hence the Belgian territory contains a lot of battlefields, of which Waterloo is probably the best known. Roman, French, British, German, Dutch, Spanish and American soldiers have left their tracks (and often their bodies) on its soil.
Independence and neutrality did not keep the country out of WWI and WWII; in both wars the route of the attacking German forces went through neutral Belgium. In the first, Belgium was largely occupied; in the second, it was occupied entirely. After WWII it abandoned neutrality and became a member of NATO and EC, hosting the headquarters of both organizations.

On 10 May 1940, the day of the German invasion, the Belgian Air Force had 182 combat aircraft, but of these only the 11 Hawker
Hurricanes were modern aircraft, while the Fiat C.R.42s and Fairey Battles were new, but inherently obsolete. Because of the vulnerability of the territory, it was inevitable that in both world wars the Belgian forces had to rely strongly on their allies.During WWII this meant that the few Belgians in military service after the occupation of the country itself, were part of
foreign forces. For the air force, this also meant using foreign-built aircraft. Especially after WWII, when the original air force, created in 1913, had been destroyed and a new one was created by transferring Belgian RAF units.
The British air force structure was later replaced by one along American lines, when US aircraft were delivered under the MADP program.
The market for home-built aircraft was always small. Until 1940 there was a small industry that built a number of own designs. The most famous of these is the Stampe-Vertongen SV4-B training biplane, a popular aircraft for aerobatics. Bombers and fighters comparable to the aircraft of other countries were also built, but were seldom granted a production contract.
WWII put an end to most of the national aviation industries design capability.

The Belgian aviation industry now almost entirely survives by license-building, wich generates jobs and transfers technology, but does little for the design capability. In the case of military equipment, license-building contracts and other so-called 'compensations' have become the determining factor in the awarding of contracts, leading to the procurement of less suitable equipment, cost increases, and corruption scandals.

This site tells the history of the 65 SV4-B airplanes, that were used as trainer by the Belgian Air Force in the period 1948-1955. 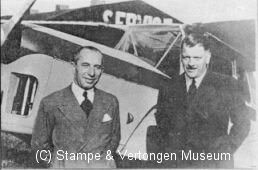 The SV was designed in 1933 by Belgian WW I pilots Jean Stampe and Maurice Vertongen. They were Moth dealers in the 1920´s. The SV aircraft was meant as a rival to the De Havilland D.H. 60 Moth and the D.H.82 Tiger Moth. In 1930 they build their own plant in Deurne (Antwerp Belgium) and the production started in 1933.

The first airplanes were build by Alfred Renard. It were the RSV planes (Renard Stampe Vertongen) type 26, 26/100, 18/26 en 22. Renard left the company to start his own and was replaced by the young engineer Georges Ivanow. He brought several improvements to the planes that resulted in de types ST26, RSV32G11 en SV3. In 1932 he was asked to design a new airplane and the SV4 (initials of the builders) was born. The plane made his maiden flight on 13/5/33 and was registered as OO-ANI. Between 1933 and 1938 6 were build (OO-ANK, OO-AAC, OO-ACB, OO-APR and OO-ASU). When Ivanow died in a SV10 crash Stampe and Vertongen ceased all aircraft building activities and concentrated on maintenance activities. Under pressure of Elza Leysen, female acro pilot, a new engineer, Demidoff, was found to build a Belgian acro airplane. On 19/10/37 the OO-JAN (as a tribute to the Belgian Air Force legend Jan Olieslagers) made his first flight.

The Belgian Air Force was looking for an airplane to replace their AVRO 530 planes. Demidoff reviewed the OO-JAN en designed the OO-ATC and OO-ATD. In 1939 Stampe went to France to present the SV-4 to the French Air Force. He returned with an offer to build 30 airplanes for the Belgian Air Force. They should be build as SV-4B (Bis to differentiate from the 8 previously built SV-4). Of the 30 built, at the outbrake of WWII 24 survived and were shipped to Africa (see article SV-4B in WWII in Africa). In 1939 France had made a new order to build another 300 planes. The Belgian plant had not the capability to build such a large number of planes, and they sold the license rights to Farmann in France. Only 50 should be build in Belgium. Only 10 were delivered to the military before WW II stopped the production. One did some test flights, the other 9 were caught by the Germans and disappeared.
In 1947 the production was resumed by Stampe and Vertongen and their first partner Alfred Renard. They renewed the SV-4B with a more powerfull engine and a sliding canopy. Mostly with a DH Gipsy Major 10 or a Blackburn Cirrus Major engine. The Belgian Air Force would replace their Tiger Moths and ordered 66 SV-4B planes. Only 65 were delivered.
In France and Algeria approx 850 Stampe SV 4A and SV 4C were built mostly powered by a 140 h.p. Renault 4 Pei engine. 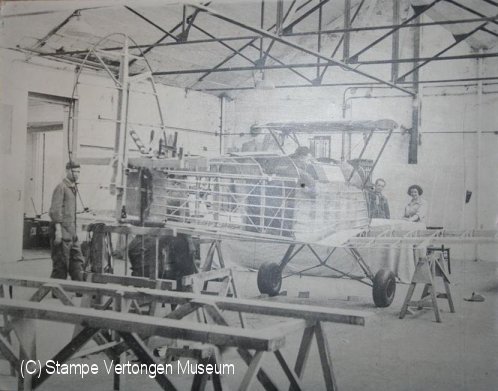 In 1970 the Belgian plant stopped all activities. It became impossible to concure the larger companies.

One of the originaly built SV-4B planes, the OO-ATD was sold to baron Thierry d'Huart in 1939, and hidden in the garden of his castle when WWII started. On 4/4/41 the Belgian pilots Michel Donnet and Leon Divoy could escape and flew to England with this airplane. In 1945 when Belgium was liberated the plane came back to his owner. It was lost in a crash in 1960.

At this moment the SV-4B is one of the rarest airplanes in the world. On this site you will find the history of the 65 planes that were build for the Belgian Air Force, what happened with them and which planes survived, as well as the history of the 24 planes of the first SV-4B series (1939-1940). 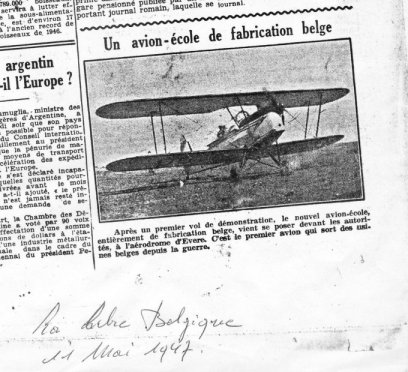 On May 11 1947 the first article about the new BAF trainer was published in "La Libre Belgique" (C) Hubert Sermon (click on the image to read the article). 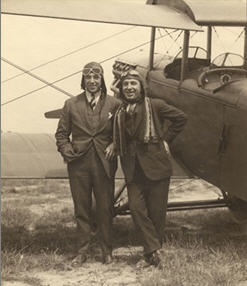 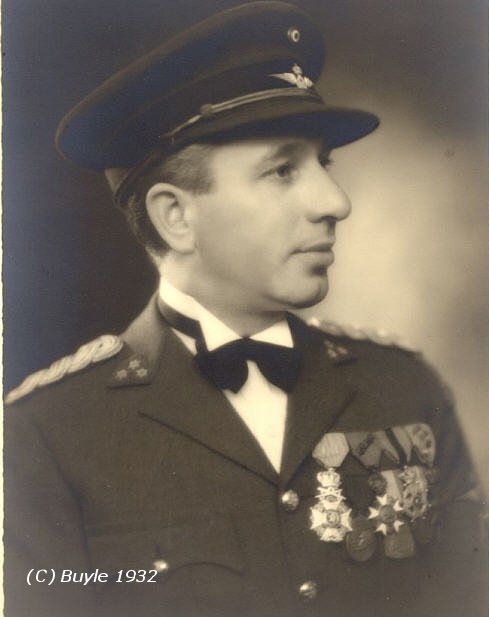 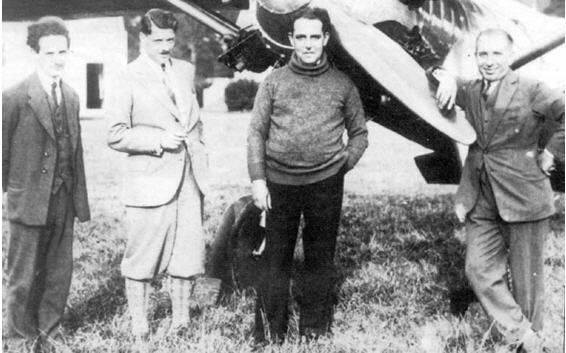 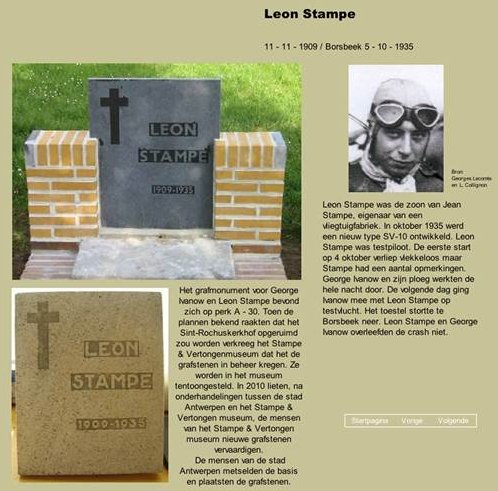 Grave stone of Leon Stampe, son of Jean Stampe, testpilot on SV-10. He lost his live on October 5 1935 during a testflight.

Database, history and gallery of the 65 airplanes that were used by the Belgian Air Force, and the still flying planes.
Acro Team "Les Manchots" , the SV planes they used, and the aces. Article of Dominique Hanson.
Crash report of the accident with SV-4b V43 in Twente (Netherland) in 1986 - Crash report of the accident with SV-4B V53 at the Old Rhinebeck Aerodrome New York (USA) in 2001 - SV-4B crashes in Belgium database of all Belgian SV-4B crashes
SV-4B with Blackburn Cirrus engine article of L. Wittemans.
Other types of SV airplanes and the LINK trainer , the other types of SV airplanes build bij Stampe Vertongen and an article about the LINK trainer, the first generation of flight simulators.
SV-4B OO-ATD and Divoy and Donnet, flight to freedom of Leon Divoy and Michel Donnet and SV-4B OO-ATD - SV-4B OO-ACB van Verbraeck en Reuter and their flight from France to Portugal in 1940
SV-4B V2 trip to Kamina (Congo) , in 1950 military pilot Manu Geerts had to deliver SV-4B V2 in Congo, Kamina. A trip of 10.578km, and 66 hrs flying time, article of R. Decobeck.
SV-4B in WWII in Africa , at the beginning of WWII 24 planes of the earlier SV-4B version airplanes, were transferred to Congo, at that time a Belgian Colony. This version had no closed canopy. An article of L. Wittemans.
Belgian Air Cadets , they used for several years the last military SV-4B airplanes.
SV links and other related links

For questions and additional information, or Newsletter inscription  Email : info@sv4b.be