SV-4B V43 was delivered to the Belgian Air Force at Wevelgem for training purposes. After a tour of operations with 7 Wing (gliders), 42 Reconnaissance Squadron, the Air Cadets and, from 1979 onward, as a privately-owned aircraft it was sold to Air Touring Service Twente, being registered as PH-ZLS on 12 March 1986. It was at Twente that the career of SV-4B V43 came to an end. Hereafter the report of the crash and the ensuing investigation has been included.
On 3 December 1986, at approximately 09:40 hrs, Stampe SV-4B PH-ZLS (ex V43) took off from runway 29 at Twente Air Base (Holland), the plot intending to make a local acrobatic training flight. Wind speed at that moment was between 14 and 26 knots at compass point of 210°. After 150 m the plane lifted off the runway and the pilot had to correct virtually immediately on account of a crosswind.
According to witnesses the following situation then developed. Immediately after take-off, having reached a height of some 10 meters, the pilot made a steep turn to the right. He then continued climbing in reverse direction to a height of 20 to 30 meters. He was flying parallel to the runway.
Reaching the end of the runway he banked 180° flying back the way he had come. There was a brief gas cut, followed by a revving-up of the engine. Most probably at this point the pilot switched over to the carburettor, which allows for a permanent feeding of fuel even at negative G-force. As a result of this action a huge fume of smoke was seen expelling from the exhaust.
After making a mild dive the pilot started a barrel roll to the right with a regularly running engine. The top of the curve ranged somewhere between 50 to 80 meters. As the plane came out of the barrel roll it was flying at a height somewhere between 30 to 50 meters. Its speed was visibly low. The pilot banked into a new barrel roll, but as the plane was on its back, the speed was clearly too low to bring the manoeuvre to a successful end. The nose dropped and the plane developed a steep dive. The height being insufficient to allow for correcting the miscalculation, the plane hit the ground at a 45° angle.
Engine power had remained normal until impact and the damage to the propeller indicated a high engine performance at the moment of hitting the soil. Total flight time was limited to 1 or 2 minutes.
Bystanders freed the seriously wounded pilot from the wreckage. He was taken to hospital, dying shortly afterwards due to the wounds incurred. 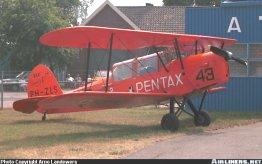 PH-ZLS was a Stampe Vertongen SV-4B Category A. It had been built in 1952 by Constructeurs Aéronautiques Stampe et Renard S.A. in Brussels. March 1986 it has been logged in with the Dutch Aviation Register.
Maximum take-off weight of this machine is 840 kg. At the moment of the accident its weight was around 700 kg. Its centre of gravity was within prescribed limits. After a lengthy storage period, PH-ZLS had been subject to a thorough revision by a certified company in Belgium. Imported into Holland early in 1986, the plane was still being kept in shipshape condition by professional mechanics, in line with a maintenance scheme set out by the RLS.

The plane was in perfect condition and the calibrations of the G-meter, rev counter and gyro of the front cockpit were still valid. Calibration certificates for the remainder of the instruments had expired. Thus was the state of the plane at the moment of export to Holland. It had been assumed that only the speed gauge could have had an influence on the origin of the accident. However, later investigation showed the instrument to indicate correct values. These expired calibrations therefore had no influence as to the cause of the crash, whereas the actual airworthiness of the plane was never in any doubt.
The SV 4 is a one-engine biplane and sports two-cockpit bays. The aeroplane is being flown in solo modus from the back cockpit. This type of aircraft allows for unlimited aerobatic flights. In normal position the stalling speed is 38 knots, whereas in upside-down position this is marked-up to 45 knots. The so-called entry speed for a barrel roll is 100 knots.
The pilot was 28 years of age and held the Dutch nationality. By profession he was a military pilot flying on F-16. Checked at Soesterberg in October 1986, no problems were observed. He was holder of a B-3 flying licence, valid through 1 April 1987. On his flying licence he had been cleared for all one-engine landplanes and for flight training. His flight experience on propeller-driven planes was 142 hours. On jets he totalled 1,920 hours flying time. For the SV-4B his instruction time had been limited to 20 minutes, augmented by another 15 minutes aerobatics initiation and followed by a close to 3 hours solo flight. In his quadroon the pilot enjoyed a reputation for being an excellent above average F-16 pilot.
The weather situation was under the influence of a low-pressure area over the Atlantic to the South of Iceland and a powerful high-pressure area over the Alps. Consequently a forceful southwestern flow carried stable but moist air. Ground wind came from a 210° direction at a 15 to 23 knot speed. At 500 feet wind speed grew to 30 knots. At 1,200 ft 1/8 stratus prevailed, changing to 7/8 altostratus at 20,000 ft. Visibility amounted to 4.800 meters and the QNH was at 1025 hPa. At about 11:55 the Twente air traffic control received a report from a Royal Dutch Navy Orion, indicating wind shear at approximately 700 ft. However, PH-ZLS never exceeded a height of 250 ft making it doubtful that even if wind shear would have manifested itself, the plane itself could not have been hindered in any way by it and therefore could not have had any influence on the cause of the accident.
Close investigation of the wreckage showed amongst others that the plane lay in a 120-degree direction. The engine had been pushed into the front part of the cockpit. The whole cockpit section had been severely reduced in size and had splintered completely. The gas handle was still wide open and the main switch in "ON"-position. The QNH had been correctly adjusted at 1025 hPa and the altitude trimmer was in neutral position.
The Pitot tube static system proved to be correctly connected. The connection of the rear speed indication instrument had been pulled out of the measuring box by the sheer force of the impact. There were no indications of loose connections prior to the accident. On account of the extended damage the positions and indications of the remaining instruments and handles (i.e. fuel valve) could not be relied upon. On account of the engine having forced its way into the front cockpit, the cockpit itself as well as the instrument panel had been completely destroyed. Moreover the top tubing of the back of the seat had been bent following the excess pull on the shoulder straps. The back of the seat had been broken upon impact in the forward direction as the seat was torn away.

Witness statements lead to the conclusion that the two manoeuvres made by the pilot were in fact supposed to have been barrel rolls and that the exit point of the first one was the entry point to the second one. Speed at the end of the first roll was visibly low and the pilot has not been seen correcting the position of the nose of his aeroplane to allow for building up his speed to 100 knots needed for starting the second barrel roll. This explains the dropping away of the nose and the advent of a dive at the top of the second barrel roll. The low altitude at which the dive was initiated did not permit timely correction of the situation.
The inertial forces at a steep angle of impact were of such magnitude that the wooden encompassing construction of the cockpit did not offer ample protection, even if the buckles of the hip belts had not broken. In view of the general destruction of the fuselage the accident was considered as non-survivable.
Flying a light propeller-driven aeroplane, such as the SV-4B, requires a totally different approach to flying in comparison to the type of aircraft the pilot had been used to fly with. The specific demands for a correct handling of an aircraft, in particular when making aerobatic flights can very easily be underestimated.
It was decided that the low-level exercise in combination with inadequate experience with the type of aircraft was the direct cause of the accident.

In the mean time SV-4B V43 was sold and restaured. Since 2004 the plane is flying again. 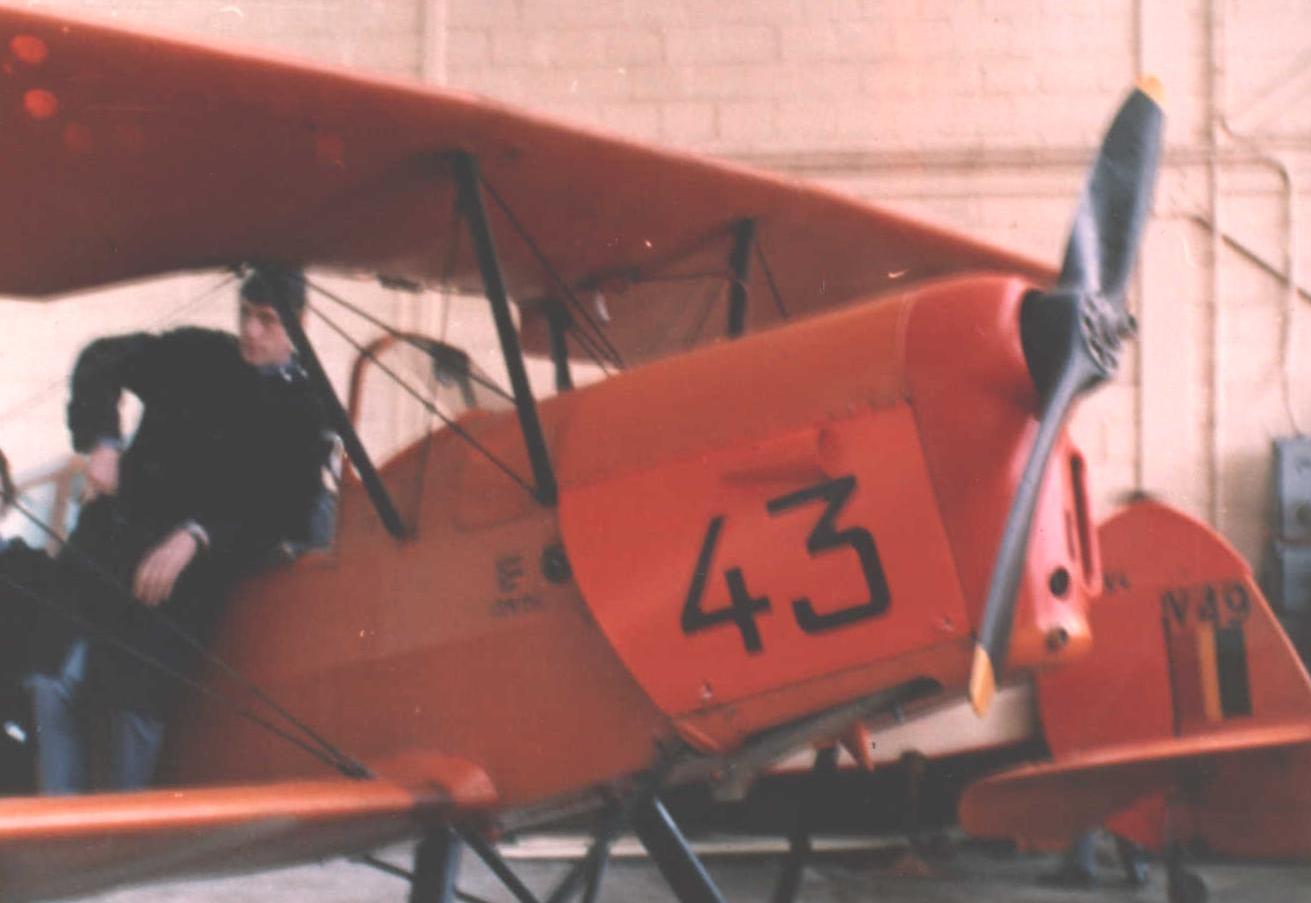 Database, history and gallery of the 65 airplanes that were used by the Belgian Air Force, and the still flying planes.
Acro Team "Les Manchots" , the SV planes they used, and the aces. Article of Dominique Hanson.
Crash report of the accident with SV-4b V43 in Twente (Netherland) in 1986 - Crash report of the accident with SV-4B V53 at the Old Rhinebeck Aerodrome New York (USA) in 2001 - SV-4B crashes in Belgium database of all Belgian SV-4B crashes
SV-4B with Blackburn Cirrus engine article of L. Wittemans.
Other types of SV airplanes and the LINK trainer , the other types of SV airplanes build bij Stampe Vertongen and an article about the LINK trainer, the first generation of flight simulators.
SV-4B OO-ATD and Divoy and Donnet, flight to freedom of Leon Divoy and Michel Donnet and SV-4B OO-ATD - SV-4B OO-ACB van Verbraeck en Reuter and their flight from France to Portugal in 1940
SV-4B V2 trip to Kamina (Congo) , in 1950 military pilot Manu Geerts had to deliver SV-4B V2 in Congo, Kamina. A trip of 10.578km, and 66 hrs flying time, article of R. Decobeck.
SV-4B in WWII in Africa , at the beginning of WWII 24 planes of the earlier SV-4B version airplanes, were transferred to Congo, at that time a Belgian Colony. This version had no closed canopy. An article of L. Wittemans.
Belgian Air Cadets , they used for several years the last military SV-4B airplanes.
SV links and other related links.